Fortunately here in the Northwest, we’ve got access to fantastic beer ingredients. We mainly source our malted barley malt from Northwest maltsters. And three-quarters of the US hops are grown just over the mountains in Yakima Valley.  This is the place to be for great Craft Beer! Luckily, we can also cut down a lot on our food miles, and keep our ingredients local. But when the very best ingredients are required for our unique German-style Ales, they are readily sourced from Germany.

THE STORY: A spectre is haunting Bainbridge Island, the spectre of Kolsch! Thousands of people each day ride the ferry to and from Seattle. Kommuter Kolsch is our gift to those grim, huddled masses, straining under the yoke of 35 minutes spent drinking coffee, checking their email, chatting with associates, and enjoying the view. Victory to the Ferry-tariat!

AVAILABLE IN DRAFT AND 16oz CANS

Eagle Harbor is our interpretation of a classic Northwest IPA. Recently the ‘More is More!’ camp have moved this noble style ever in the direction of increased alcohol and bitterness, flashy new hop varieties, and a tendency towards one-upsmanship. We’ve taken a step back, thought about what makes a great every-day IPA, and kept with our beloved NW IPA’s roots. Hops include classic varieties, including Cascade, Centennial, Crystal, Amarillo, and Apollo. Malt: NW Pale, Light Crystal, Wheat, and Special Aromatic. Dryhopped and ran through several pounds of whole leaf Cascade in our hopback, Eagle Harbor presents a firm hop aroma, supported by enough malt character to keep you coming back for more.

THE STORY: As the story goes, India Pale Ale was a big, hoppy beer designed to survive passage in a ship’s hold all the way From England to India. Eagle Harbor is the inlet that Downtown Winslow adjoins and the location of the WSF ferry terminal. Interestingly, Winslow was not the main settlement on the island for much of its history. Searching for a new harbor to build ever larger ships, in 1903 the Hall Brothers Shipyard relocated from Port Blakely to the new town of Winslow on Eagle Harbor. Eagle Harbor IPA is named for that fading dream of the Hall Brothers’enormous five-masted schooners, sailing to distant shores.

Arrow Point Amber is a year-round German-style Amber Ale / Altbier that is darker and maltier than our Kölsch Ale and has a strong malt-forward character accented with Noble hop flavor and aroma. Malt: Pilsner, Munich, Dark Munich, Acid, Caramunich and Blackprinz. Hops: Sterling and Crystal.

THE STORY: This beer is named after Arrow Point, a unique arrow point-shaped area along the NW shoreline of the island that included one of the many Mosquito Fleet stops to/from Seattle. Arrow Point also got its name from the many Native American artifacts found on the point.

THE STORY: Located on the West side of the Island, Battle Point was supposedly named for a battle between a raiding northern tribe and the local Suquamish, in which Chief Kitsap and his men were victorious. During World War II, a radio post was established there as part of a network for intercepting and decoding Japanese radio transmissions. Now it’s a park, and when I was a kid we used to shoot off model rockets there. Battle Point Stout is named after this historical corner of the island.

AVAILABLE IN DRAFT AND 16oz CANS 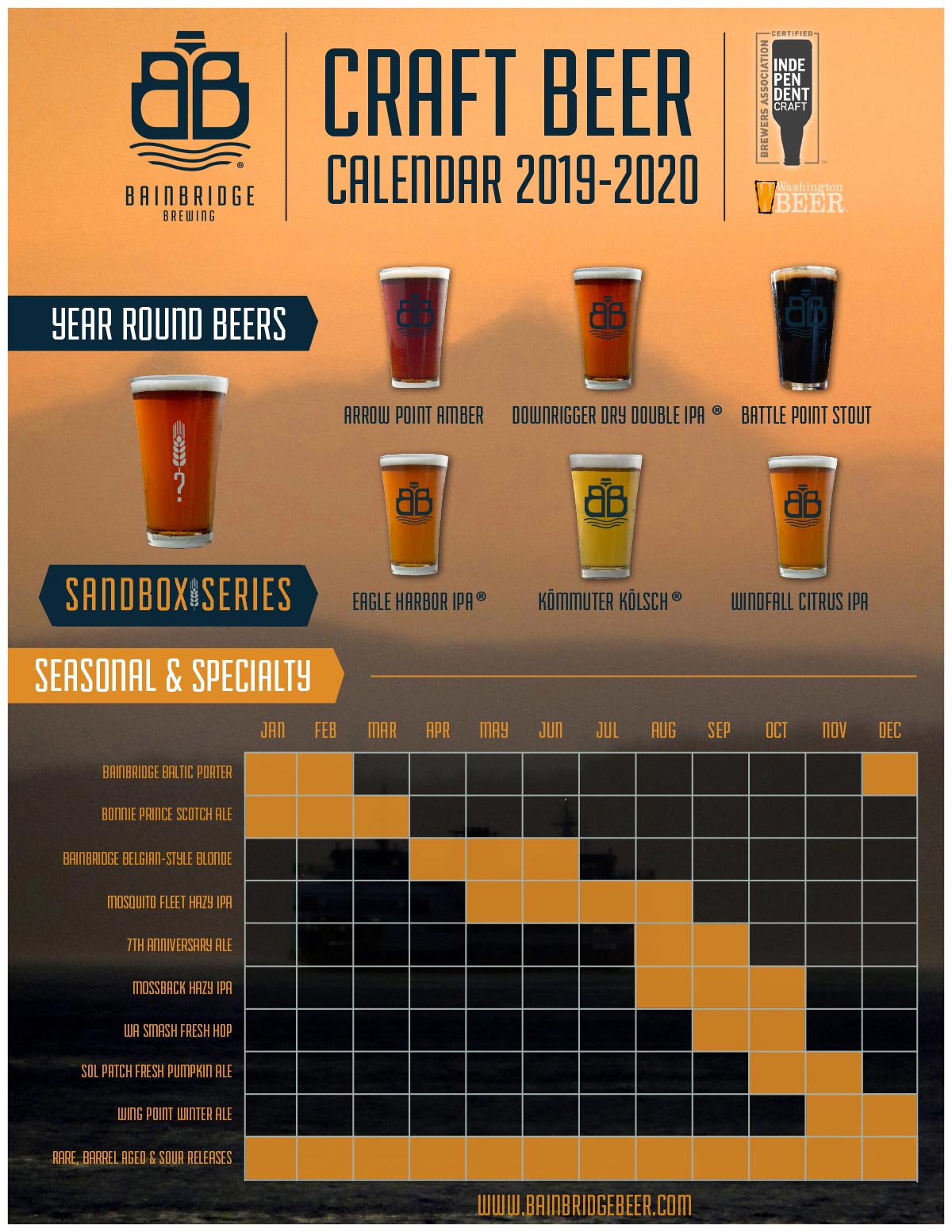